Who Will Run the Future of the US Pharma Market: Generic Or Branded Drugs?

What are generic drugs?

Generics are analogues of branded drugs. They are based on the same active ingredients as branded drugs, although in terms of excipients they may differ from those produced under a brand name. In addition, while brand-name drugs are sold under brand names, generic drugs are much more often sold under the names of their active ingredients. Even if their manufacturers register them under some specific names, they should never be the same as those by which their prototypes are known.

If the active substance of the drug is any chemical compound, then the analogues of this drug with the same main ingredient are called generics. If the active ingredient of a brand-name drug is a specific bacterium (or several bacteria), then the generic drug of such a drug is called a biological analogue, or biosimilar. Basically, these drugs are used to treat disorders of the microflora of the gastrointestinal tract.

Generics are similar in terms of their principle of action, indications and contraindications, the number and type of side effects to branded drugs. At the same time, they are often much more accessible, which allows a wider range of patients to access treatment for various diseases. To date, the leading generic drug manufacturers in the US include the pharmaceutical companies Teva, Mylan, and Novartis. Widely represented on the market are generics produced in other countries, such as Germany, Great Britain, Canada, Hungary, India, etc.

Few people think about it, but as of 2022, generics make up a much larger share of all drugs dispensed than branded drugs. This is not surprising, because one original drug can have an unlimited number of generics. Typically, one popular branded drug has at least six widely available generics.

A brand name drug is manufactured and marketed by a pharmaceutical company that owns the patent. When the patent expires, it is common for generic drugs to enter the market. These are almost identical versions of the brand name drug but are developed by competitors. Generic drugs are often sold under its chemical name but can also be assigned new brand names. If the latter is the case, the drug becomes known as branded generic.

Distribution of branded vs. generic drugs dispensed in the US from 2005 to 2021 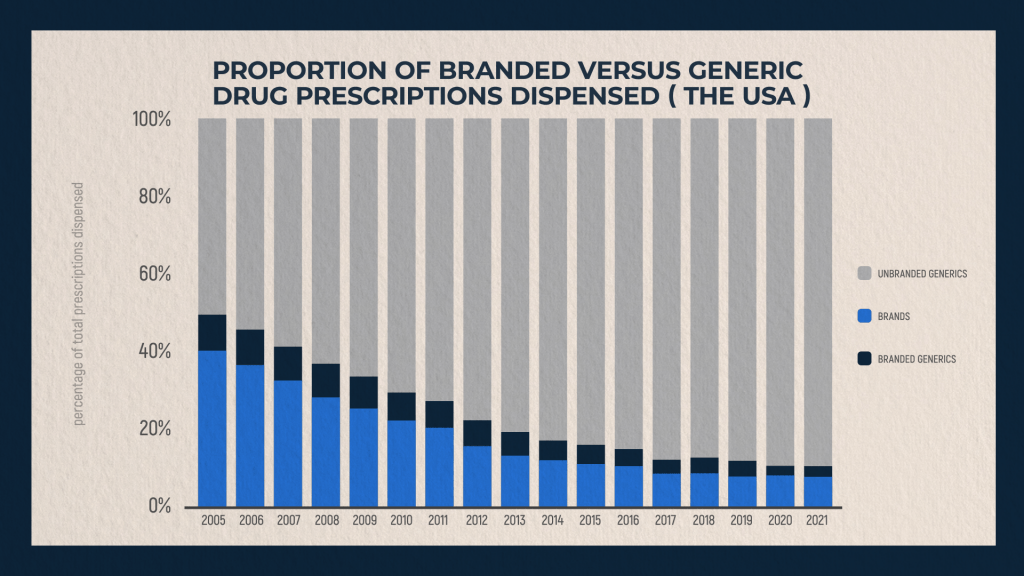 Part of this change in this ratio is due to the fact that the patent protection of many drugs has expired, and partly to the fact that Americans have gained wide access to imported generics through the development of online trade. Online drug purchases have skyrocketed over the past five years, with a new peak that began with the start of COVID-19 pandemic and that has not yet been passed.

Generics are substantially cheaper than originator drugs, so it is logical that national health care costs are being reduced by the increasing use of generic drugs (generics) and biosimilars. US health data show that over the ten-year period from 2010 to 2019, more than $2.4 trillion in total savings was generated by increased sales of generics and biosimilars. This is more than an impressive amount, and there is a tendency to increase it. So, in 2019 alone, savings on generics amounted to $338 billion. 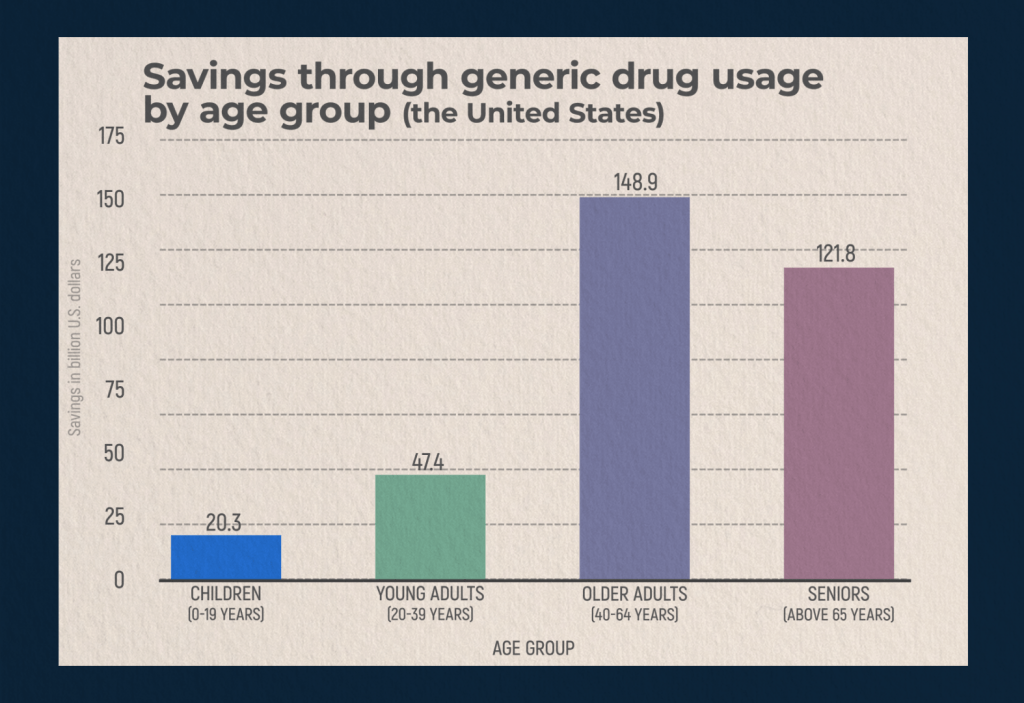 According to statista.com, people over 65 years old saved about $122 billion in 2020 through the purchase of generics. It is older people, as well as in the range of 40-64 years, who most often choose to purchase generic drugs. Younger adults are less likely to opt for generics, and parents of underage children also prefer branded drugs.

For example, total savings of Prilosec with the generic entry year of 2002 was about 12 billion US dollars in that year. Prilosec is known under his generic name omeprazole. It is a means to reduce the acidity of the stomach, is used in the treatment of gastric and duodenal ulcers.

Affordability of generics greatly contributed to their wide distribution among patients with a wide variety of diseases. As mentioned above, the share of generic drugs in the US pharmaceutical market has grown strongly in recent years (see paragraph 2), and generic drugs save both the government and consumers significant amounts of money (see paragraph 3). However, brand-name drugs still account for 80% of all drug spending in the US today. Speaking more precisely, 84 percent of total drug bill spending in the US is still spent on branded drugs. 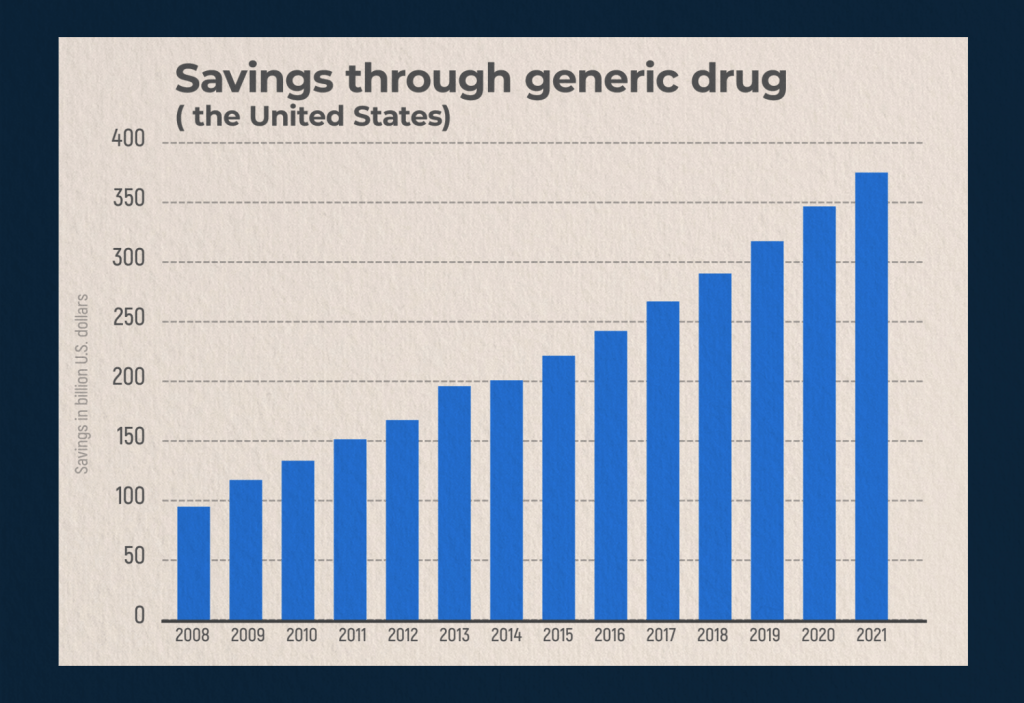 Between 2008 and 2021, the amount of money saved by the US healthcare system through the use of generic drugs has more than doubled. The price of generics for end users is affected by the payment method and health insurance plan. For example, some insurance plans may cover the entire cost of drugs, while others may cover half or even less. Commercial health insurance plans provide the highest savings. Paying for generics with a bank card is more profitable than cash: in 2020, those customers who paid in cash showed the lowest savings.

US healthcare spending on drugs in 2021 was slightly over $574 billion. Approximately 16 percent of this amount was for generic drugs – generics and biosimilars. Sales of branded and non-branded generics accounted for 6.8 percent and 9.2 percent, respectively. Branded generics are the ones manufactured by a subsidiary company which was the initial patent holder of the prototype medication or by an affiliated pharmaceutical company. Branded generics often become available to customers earlier than non-branded ones, which include generics produced by all other pharmaceutical companies, domestic or foreign ones.

Why are branded drugs more expensive? 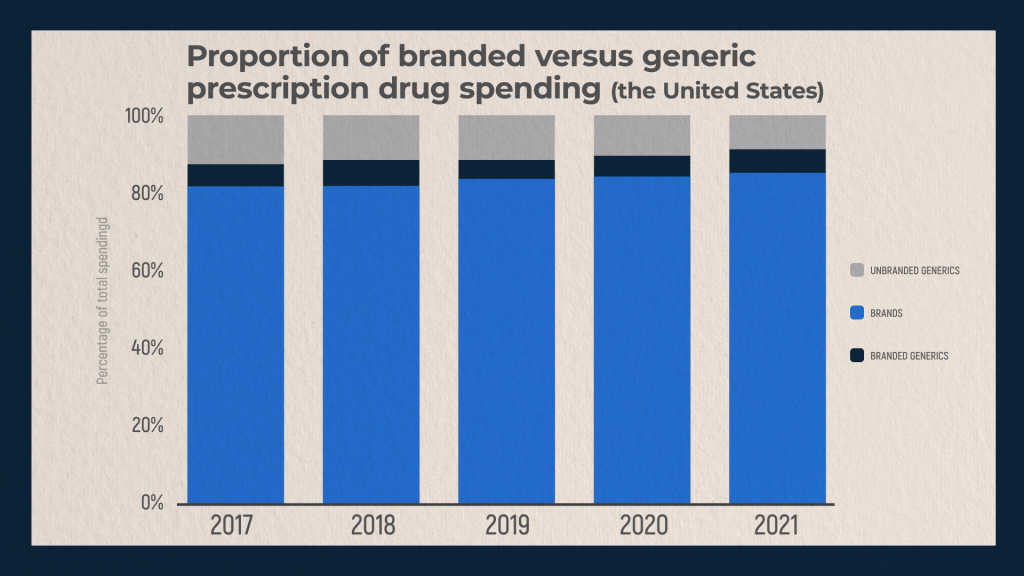 Sales of brand name drugs account for some 84 percent of the total amount of money spent on medicines in the United States in 2021. One explanation for this large share is that brand name drugs can cost considerably more than generic versions. When a pharmaceutical company is granted a patent for a drug, key processes and active ingredients are protected; this exclusivity allows firms to price a product at what the market will bear..

The graph in paragraph 3 of this article shows how much generics help save the US healthcare system. However, statistics for 2021 showed that 84 percent of all funds spent on medicines are for original medicines. What is the reason for this number? First of all, very high prices for branded medicines. Many of them are several times more expensive than their generics, not differing from them in anything other than packaging design and trade name. When a pharmaceutical company holds a patent for a drug, the key manufacturing processes (such as the synthesis of the active ingredient) and active ingredients are protected and are the intellectual property and trade secrets of the patent holder. This special position allows the company that holds the patent to set the price of the product as they wish, based only on what the market can bear. A good example of this situation with the brand name drug Humira: in the US it is marketed at a high price, and sales of this drug generate around 20 billion U.S. dollars per year.